Barcelona, Spain: Researchers have identified a range of genetic alterations in glioma brain cancers that will help them to understand how different mutations in one particular gene interact with other gene alterations and which ones are more susceptible to targeted treatments in adults.

Presenting results from the largest group of glioma patients to date, Dr Karisa Schreck told the 34th EORTC-NCI-AACR [1] Symposium on Molecular Targets and Cancer Therapeutics in Barcelona, Spain, that although the different alterations in the BRAF gene, which can drive the development of glioma, were well understood in gliomas occurring in children, this was not the case for adults. 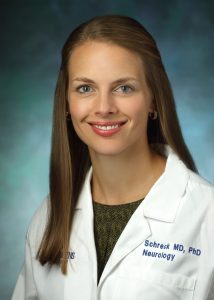 Dr Schreck, who is an assistant professor of neurology at Johns Hopkins University School of Medicine, Baltimore, USA, says her research focuses on the development of targeted therapy for BRAF-mutant glioma. When she began to design her first clinical trial, she realised the breadth of BRAF mutations in adults with brain cancer and how they respond to traditional chemotherapy was not well understood. Her cohort of patients, the largest to her knowledge, allows her to start answering these questions, and will enable her to design better-informed clinical trials for these patients [2].

The term ‘glioma’ covers several types of tumours that originate in the glial cells in the brain. Glioblastoma is the most common type in adults and children, occurring in 3.23 per 100,000 of the population, and only 7% of glioblastoma patients survive for five years after diagnosis [3]. New and better treatments are urgently needed, and drugs have been developed that target specific BRAF mutations, such as dabrafenib and trametinib, which inhibit the BRAFv600E mutation. Knowing which mutation or combination of genetic alterations are driving a patient’s cancer is crucial to choosing the best therapy that is most likely to prolong survival.

Dr Schreck and colleagues collected data from Dana-Farber/Harvard Cancer Center, Johns Hopkins Hospital, the Project Genomics Evidence Neoplasia Information Exchange (GENIE) and The Cancer Genome Atlas (TCGA) on nearly 300 glioma patients, 206 of whom were adults. They looked at clinical information, including what treatments the patients received and how long they lived, and the structure and molecular make-up of tumour tissues, including genetic alterations. They divided the tumours into three groups, based on how the BRAF alteration activates a signalling pathway called ERK (extra-cellular signal-regulated kinase) that contributes to cancer: Class I (mutations such as BRAFv600E , in which BRAF is able to activate ERK by itself), Class II (mutations in which BRAF needs to pair up with another BRAF molecule to activate ERK in a process called dimerization), Class III (mutations that amplify ERK signalling through the RAS gene and other signalling molecules), and also gene rearrangements, amplifications and other, unclassified alterations.

Dr Schreck says she found that BRAF-altered gliomas in adults and children had different features. There were more Class I BRAFv600E alterations in adults, and more BRAF fusions in childhood glioma (fusion occurs when part of a BRAF gene wrongly attaches or ‘fuses’ to a different gene, allowing it to cause cancer). BRAFv600E alterations were associated with improved overall survival in adults with glioma, but for the most aggressive type of glioma – glioblastoma – that improvement disappeared, and increased age was associated with worse survival in these patients.

The researchers also found that BRAFv600E conferred sensitivity to targeted therapy in adult patients. They knew that glioma with BRAFv600E alterations could be sensitive to treatment with BRAF and MEK inhibitors. This study showed patients who received these treatments lived longer than those with the same BRAF alteration and tumour grade who did not. They also demonstrated that there were other BRAF alterations in patients with glioma that might be targetable using MEK inhibitors or dimerization-disrupting BRAF inhibitors. They hope this study will motivate researchers to include glioma with these mutations in clinical trials evaluating new BRAF-inhibiting drugs.

Targeted therapies halted the growth or shrank the glioma in six out of 13 adult patients treated with them; six patients had pleomorphic xanthoastrocytoma, four had glioblastoma multiforme, two had pilocytic astrocytoma and one had another type of astrocytoma. The average (median) time before the cancer progressed was five months and the overall survival time was nearly 14 years. It was four and a half years in patients with glioblastoma.

Dr Schreck concludes that she and her colleagues have found a wide range of genetic alterations in this large group of patients with BRAF-driving gliomas. She says the findings suggest that there are distinct biological characteristics that may influence clinical outcomes and these need to be studied further to understand their impact.

Professor Ruth Plummer, from Newcastle University, UK, is chair of the 34th EORTC-NCI-AACR Symposium and was not involved with the research. She said: “These results show how gliomas can behave differently in adults and children, potentially including how they respond to targeted therapies. The study advances what we know about gliomas in adults and this knowledge will enable us to better match treatments to the cancer, depending on the specific variations in the BRAF gene. It will also enable us to develop new and better therapies to target different genetic variations. Glioma can be a difficult disease to treat successfully and we urgently need to find new drugs that help us to improve outcomes for these patients.”

[2] Johns Hopkins media policy does not allow their researchers to be quoted directly in third-party press releases.