A steroid hormone called aldosterone is linked to an increased risk of kidney failure in patients with chronic kidney disease (CKD), according to a study published in the European Heart Journal [1] 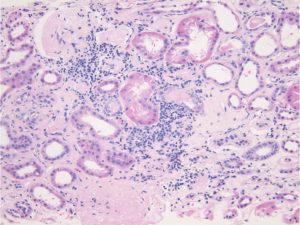 . The risk of CKD worsening and developing into end-stage kidney disease was independent of whether or not patients had diabetes.

The findings are important because they suggest that aldosterone plays a role in the progression not only of CKD but also heart and blood vessel problems, and that an existing drug that targets the action of aldosterone may help to prevent CKD getting worse.

Aldosterone is a steroid hormone secreted by the adrenal glands, which sit above the kidneys. Its main role is to regulate salt and water in the body, and so it plays a central role in controlling blood pressure. Too much of it can lead to high blood pressure, cardiovascular and kidney diseases.

The lead author of the study, Dr Ashish Verma, assistant professor at Boston University School of Medicine, USA, said: “Recent randomised controlled trials have shown that a drug called finerenone is effective in delaying CKD progression and adverse cardiovascular outcomes in patients with chronic kidney disease and diabetes. However, the role of aldosterone in this process was not directly investigated and levels of the hormone were not measured.” [2]

Finerenone targets the non-steroidal mineralocorticoid receptor (MR). When this receptor is activated by aldosterone, elevated levels of the hormone lead to high blood pressure, cardiovascular and kidney diseases.

“Since excessive levels of aldosterone is very common, yet mostly unrecognised, we hypothesised that one reason why finerenone was effective in lowering the risk of CKD progression was that it was treating unrecognised high concentrations of the hormone,” said Dr Verma.

Dr Verma and his colleagues investigated the associations between aldosterone concentrations in the blood and kidney disease progression among 3680 participants in the Chronic Renal Insufficiency Cohort study, which ran in seven clinics in the US between 2003 and 2008. The participants were aged between 21 and 74 years old.

They focused on CKD progression, which was defined as a 50% decline in the ability of the kidneys to filter blood through the glomerular blood vessels, known as the estimated glomerular filtration rate (eGFR), or end-stage kidney disease, whichever occurred first. They followed the patients for an average (median) of nearly ten years. During this time CKD progression occurred in 1412 (38%) of the participants.

After adjusting for factors that could affect the results, such as medications, other medical conditions, age, race, height and weight, they found that each doubling of aldosterone concentrations in the blood was linked to an 11% increased risk of CKD progression. Patients with concentrations in the top 25% of the group had a 45% increased risk compared to the 25% of patients with the lowest aldosterone concentrations. The risk was similar regardless of whether or not patients also had diabetes.

Dr Verma said: “These findings are important as they suggest that higher concentrations of aldosterone may play a role in CKD progression and cardiovascular disease in patients with CKD. This study provides evidence for the mechanism by which mineralocorticoid receptor antagonists could delay CKD progression and supports investigating their value in patients without diabetes.”

The Food and Drug Administration (FDA) in the US has approved the use of finerenone for patients with CKD and diabetes. Now a randomised controlled clinical trial is investigating the efficacy and safety of finerenone in non-diabetic CKD patients. “This trial will play an important role in answering the question, whether MR antagonist therapy will be useful in delaying CKD progression in patients with CKD and without diabetes,” said Dr Verma.

Professor George Bakris, of the University of Chicago Medicine, USA, who was not involved in the research but was involved in the randomised controlled trials of finerenone in diabetic patients, has written an editorial to accompany the study, also published today [3]. “Taken together, these studies suggest that aldosterone levels need to be assessed in all patients at risk for and/or in the presence of cardiorenal disease, especially if they have central obesity and/or resistant hypertension. We now have relatively safe and better-tolerated agents than traditional steroidal agents that can and should be used to reduce cardiorenal risk in these groups of patients,” he writes.

Limitations of the study include: 1) there were no measurements of a protein called albumin in urine, or of another protein, renin, in blood samples; this could indicate whether or not high levels of aldosterone were dependent on renin, which is released by the kidneys and also plays a role in blood pressure; 2) aldosterone levels were only measured once at the beginning of the study; 3) data on the duration of angiotensin-converting enzyme (ACE) inhibitors and angiotensin receptor blocker (ARB) use, which could affect aldosterone levels, were not available; and 4) the study is observational and cannot show that aldosterone causes CKD progression, only that it is associated with it.

The European Heart Journal is the flagship journal of the European Society of Cardiology. It is published on behalf of the ESC by Oxford Journals, a division of Oxford University Press. Please acknowledge the journal as a source in any articles.