Smoking by mothers during the period immediately before and after conception is linked to a delay in embryonic development, smaller foetuses at the time of the 20-week ultrasound scan, and lower birth weight.

The study, which is published in Human Reproduction [1], one of the world’s leading reproductive medicine journals, followed 689 women with singleton pregnancies between 2010 and 2018. The researchers found that by the tenth week of pregnancy, embryo development was delayed by nearly a day in women who smoked ten or more cigarettes a day compared to non-smokers, and by 1.6 days in smokers who had conceived by means of in vitro fertilisation (IVF) and intracytoplasmic sperm injection (ICSI).

They also found that embryos were not able to “catch up” their development over the course of the pregnancy and were more likely to be born small for gestational age and with a median (average) birth weight 93 grams lower than babies born to non-smoking women.

This is the first study to investigate the association between smoking by mothers from 14 weeks before conception up to 10 weeks after conception (the periconceptional period) and the development of embryos as assessed by looking at the external and internal shape of the embryo (the morphology) during ongoing pregnancies. The researchers used virtual reality to look at the embryos’ development and they compared the morphology against established stages of embryo development, known as the Carnegie Stages.

Dr Melek Rousian, a gynaecologist at Erasmus MC, University Medical Center, Rotterdam, The Netherlands, who led the study, said: “One of the key messages of this study is that the delay in embryonic development due to mothers smoking in the periconceptional period is also associated with smaller foetal measurements at the 20-week ultrasound scan and a lower birth weight. Part of foetal and neonatal outcomes can be explained by smoking during the periconceptional period and the delay in embryonic development.”

The Carnegie Stages only cover embryonic development for the first 10 weeks of gestation, so the researchers could not compare the embryo shapes against an agreed standard beyond this stage, but the ultrasound scans and birth weights provided developmental information instead, including head and abdominal circumferences and thigh bone length.

“The impact of periconceptional maternal smoking on delaying embryonic development appears to have a greater effect in the second trimester of pregnancy than at birth,” said Dr Rousian. “We think that perhaps there is some catch-up growth during the second and third trimesters, but the delay in morphological development cannot be fully recuperated during the course of the pregnancy, as is shown by the 20-week ultrasound scans and birth weights.”

The mothers were taking part in the ongoing Rotterdam periconceptional cohort, a large prospective study embedded in patient care in the department of obstetrics and gynaecology at Erasmus MC, University Medical Center, Rotterdam, which is a tertiary care hospital for preconception and prenatal care. Consequently, they do not represent the general population. However, Dr Rousian said the results are important for all women planning to become pregnant.

“The results of this study emphasise the importance of smoking cessation prior to conception and that efforts to help women stop smoking should focus on this time window. If possible, women should stop smoking from the very moment they plan to become pregnant, but it’s always a good thing to stop smoking anyway, particularly at any stage of pregnancy. Smoking not only impacts an embryo’s growth during pregnancy and birth weight, but also embryo development right from the very early stages of pregnancy,” she said.

“We were able to show a dose-response effect of maternal smoking on embryonic morphology and foetal growth; the more cigarettes a woman smoked the greater the developmental delay. This stresses the importance of public health initiatives to promote preconception education and care, including effective programmes to assist couples to stop smoking.”

Dr Rousian and her colleagues are studying how best to help future parents stop smoking with the help of face-to-face consultations, follow-up visits and digital lifestyle interventions (such as www.smarterpregnancy.co.uk). They believe this is important as numerous studies have shown how factors that affect foetal development can have an impact not only during pregnancy but also on health in later life.

“This is why the periconceptional period is an important area of research because many future parents are not aware of the presence of a developing embryo in the early days when a pregnancy has not yet been confirmed,” said Dr Rousian.

New developments, such as better imaging techniques, including virtual reality, have made it possible to study how an embryo develops in much greater detail, rather than depending on information gained from laboratory research.

First author of the study, Dr Carsten Pietersma, a PhD candidate and ultrasonographer at Erasmus MC, said: “Since it is known that smoking negatively affects foetal growth during pregnancy, we wanted to study how this may also impact the development of the embryo. This developmental morphological study using the Carnegie stages takes multiple dimensions of the embryo into account, instead of just one growth parameter.”

Strengths of the study include the large number of pregnancies studied, with certainty about the dates of conception, particularly for the IVF/ICSI couples, and the availability of ultrasound data from the first trimester. Limitations include the fact that women reported their smoking habits using a questionnaire and so might not report accurately, leading to an underestimation of the true effects of smoking. The association between smoking one to nine cigarettes a day and delayed development was not significant, probably because of the small number of women in this group. 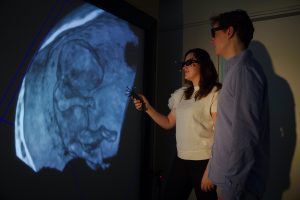 Human Reproduction is a monthly journal of the European Society of Human Reproduction and Embryology (ESHRE) and is one of the top three journals in the world in the field of reproductive biology, obstetrics and gynaecology. It is published by Oxford Journals, a division of Oxford University Press.

Please acknowledge Human Reproduction as a source in any articles.